How “Strategic Sloppiness” Can Skyrocket Your Marketing

A recent article by New York Magazine’s Kevin Roose has been circulating LinkedIn in the last week or two… and garnering quite a bit of attention.  Why?  For one thing, the (somewhat misleading) headline, “How Spelling Mistakes and Bad E-mail Etiquette Can Help You Get Ahead,” and image choice definitely grab your attention.  Second, the article opens with an anecdote about a hot news story: the first several email exchanges between Facebook founder Mark Zuckerberg and the 22-year-old co-founder of Snapchat, Evan Spiegel.

What interested us about the article was how the content can be applied to marketing, but let’s talk about the gist of the article first.  If you haven’t heard about the controversy regarding Zuckerberg and Spiegel, here’s the deal: Toward the end of December, Forbes released their annual “30 Under 30” listing of top “world changers.”  The list featured Spiegel, and Forbes included Spiegel’s account of his first round of communication with Zuckerberg in which Spiegel responded to Zuckerberg’s gushy November 2012 email about meeting with a casual response.  As many know, Zuckerberg has since offered to purchase Snapchat for $3 billion… and been turned down.

A firestorm ensued, with many calling Spiegel “arrogant” for seemingly brushing off the founder of Facebook.  In response, Spiegel released a screenshot of the original communication: 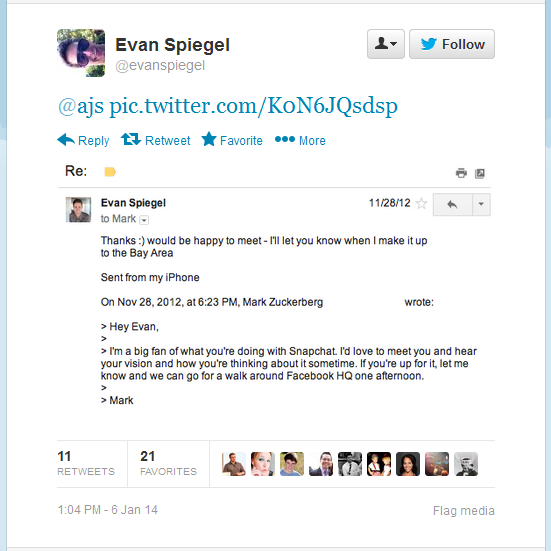 As you can see from the exchange above, Spiegel’s reply was short, casual and contained no hint of eagerness to meet.  Did we mention the smiley emoticon and sentence fragment—to the FOUNDER OF FACEBOOK???

Now to the stance in Roose’s New York Magazine article: Roose called Spiegel’s reply “brilliant” and went on to make a case for what he calls strategic sloppiness: “If you, like Snapchat’s Evan Spiegel, want to show a powerful person that you’re important enough to be feared and respected, you might want to try playing fast and loose with your communication from time to time. If pulled off correctly, strategic sloppiness can be a great playing-field leveler.”

Of course, Roose’s article included some caveats, but what we are most interested in is how strategic sloppiness can be applied to marketing.  Let’s face it—we’re all barraged with marketing messages every day.  Most are carefully crafted, yet the vast majority are tuned out or ignored.  The marketing messages that get noticed stand out from the pack in some way.

So how can you make your marketing stand out?  The messages must be personal, conversational and have a little edge.  By “edge,” we mean you might consider making popular references, slang, sentence fragments, humor, etc.  Just think about it: What email would you most likely open?  The one with a subject line of “Tips for Effective Marketing,” or the one with a subject line of “3 Simple Steps to Skyrocket Your Biz”?  I know which one I would open.

Keep in mind, there’s still a lot to be said for proper spelling and grammar, but don’t be afraid to push the envelope a little—your prospects will thank you!

So what do you think?  Do you agree that strategic sloppiness can actually work to your advantage?  What’s an example of how it’s either caught your attention or worked for you!

How to Create a High-Converting Homepage

Do you ever wonder why some businesses bring in a ton of leads that convert to sales while others struggle to stay afloat? Why some make huge profits while others barely break even? There could be a plethora of reasons behind a business underperforming, but a pretty...

END_OF_DOCUMENT_TOKEN_TO_BE_REPLACED

For the first episode of his new YouTube show, our CEO Ford Saeks focused on niche marketing and the questions, "How do I find my niche?" and "How do I market to my niche?" We love his explanation but thought you might also benefit from hearing some others'...

END_OF_DOCUMENT_TOKEN_TO_BE_REPLACED

How to Increase Conversions Through Quality Landing Page Design

Let’s follow the path of a typical consumer. You see an ad for a product on Facebook. It catches your interest, so you click. The transition is pretty smooth and now you see a landing page design that gradually gives you more and more information about the benefits of...